A deadbolt lock, also referred to as a deadlock or deadlock, refers to a locking mechanism that is distinct from a spring bolt lock in the sense that it cannot be moved to the open position except by rotating the lock cylinder with a key. Unlike the common spring bolt lock, a deadbolt lock does not allow for retraction of the lock, therefore making a door more resistant to entry without using the correct key. It is therefore often used to complement a spring-bolt lock on an entry to a building.
There are different types of deadbolt locks, and most of them are determined by the strength or the material used in making the door knob on which most of them are fixed. Some of these locks are discussed below, thanks to some useful information provided by lakeoswegolocksmith.net.

This is the most common type of deadbolt locks. This lock is mounted inside a door and has a twist knob in the interior and key cylinder on the exterior of the door’s face. This therefore means that this lock can only accept a key on one side of the lock, but is operated by a twist knob on the other side. 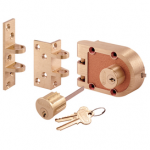 These types of deadbolt locks are also mounted internally. What distinguishes the double cylinder deadbolt from the single cylinder deadbolt, however, is that this deadbolt has no twist knob but both sides have a key cylinder instead. The double cylinder deadbolt therefore requires a key to open the door whether you are inside or outside the house.
The advantage of the deadbolt lock is that it does not provide room for any intruder opening the door from outside using some of the conventional means such as breaking a glass in or near the door frame and simply reaching for the twist knob. Even after a successful breakage of the glass, the intruder would still require a key to open the lock.
This deadbolt lock, however, has a striking disadvantage. It is infamously known to hamper exit efforts in the event of an emergency such as fire, as it may not be easy to hand pick the correct key to the lock. Due to this tendency to violate safety regulations, usage of the deadbolt lock has been strongly discouraged.

The keyless deadbolt lock is also mounted on the inside of the door, but has a keypad instead of a key hole where one can type in a secret pin code to unlock the door.
The advantage of using this keyless lock is that you completely do away with the need of a key, and there is therefore no chance of losing or misplacing the key. Another positive feature of this lock is that it is easier to change the pin code in case you feel someone has learned of it, as opposed to the key system where you would have to go through the rigor of finding a locksmith to do the same.
The obvious disadvantage of this lock system is that if it uses electric power, then its effectiveness will be ultimately dictated by power availability. This would therefore mean a power outage may lock you in or out of your residence. 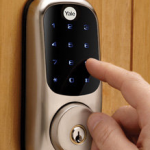 The digital deadbolt is a variation of the key less deadbolt that operates by means of batteries or electric current.

This is a type of lock that’s bolted to the inside face of the door.
The major advantage of this lock is that it locks automatically behind you each time the door is closed, thereby saving you the trouble of always having to remember to lock the door.

The vertical deadbolt is also bolted to the inside face of the door. As opposed to some horizontal deadbolts, this lock is placed on top of the door, thereby making it difficult for an intruder to pry it open by placing a bar between the door and the frame.

The mortise deadbolt is the last type of deadbolt lock. It is merely an older style key lock that’s installed in a mortise or recess pocket that’s cut in the edge of the door so that it is tamper-proof. This lock is usually strong, even though the act of boring a large hole into its frame may weaken the structure of the door itself.

Deadbolt locks come in different types, but what is striking is that each type has one unique feature that makes it the most preferred in a given situation.