The mechanisms behind many Kwikset Smartkey Locks are not entirely perfect since while they can’t be bumped, they can easily be cracked in many other ways. The fact that they are clever considering a user can easily reprogram the key does in no way guarantee that they are not insecure. Even in the aspects that they incorporate smart technology, the locks are circumventable as will be demonstrated below. The following information is provided by our friends at LosAngelesLocksmithPros.com.

To start with, any burglar who is sufficiently committed to gain access to your house can break your window or use a crowbar break the Kwikset Smartkey Locks at the door and get in. The fact that you have a smart lock will not matter to them. To them, hacking their way through the 128-bit, or so, AES encryption in addition to whatever else you have added is a waste of time. Note also that a Halligan that is used by firefighters to legally break down doors costs a mere 250 dollars on Amazon. With Halligan, even a sliding door can easily be pop out. There is also the option of someone simply snatching your actual key and getting in that way.

Even when the above methods are not probable, the Locks can be opened in a matter of seconds with the use of a paper clip and a screwdriver. Two notable lock hackers called Toby Bluzmanis and Marc Weber Tobias demonstrated that these locks are not pin-tumbler lock and hence do not have the physical to stop the plug from turning when they are manipulated. They were able to compromise the locks by thwarting one such lock with a 4 inch screwdriver and a torque wrench.

According to the Builders Hardware Manufacturers Association (BHMA), the trade association for manufacturers of commercial builders’ hardware, a lock of such quality must be able to withstand three hundred pounds inches of torque, yet these hackers used less to open Kwikset Smartkey Locks. Toby and Marc demonstrated to WIRED, an organization that focuses on the reliability of current and future technology trends that the performance of Kwikset Locks BHMA’s standards. WIRED’s requests for comments on the same from Kwikset have so far been futile.

One smart way of defeating the locks involves inserting a piece of blank into the keyway of the lock and punching out the cap using a hammer on the back of the plug, a small piece of metal. The hackers inserted a wire that has a looped end right into the keyway and turned the tailpiece. The tail piece rotates autonomously with respect to the plug, essentially making a key immaterial. The procedure works in less than one minute leaving no damage and/or trace whatsoever because the original key will still open the locks.

Alternatively, the lock can be compromised by simply inserting a 4-inch screwdriver to the keyway, grasping it with a wrench before turning it to open the Kwikset Smartkey Lock in just fifteen seconds! Ideally, the lock should withstand a torque of 300 pounds-force-inch, yet this method requires slightly a torque slightly higher than 100 pounds-force-inch to overcome the locking mechanism of the Locks. The next method involves taking advantage of the loopholes in the locks’ reprogramming feature. 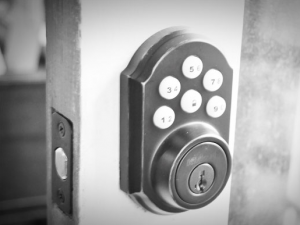 Smartkey is essentially a 5-pin lock and hence has six depth increments that correspond to the depth and heights of the valleys and mountains on a key. To reprogram it, the original key is placed in the lock and a tool is inserted into a slot in the face of the lock. The tool shifts the assembly back for approximately an eighth of an inch thereby separating the pins and slider and holding them apart while another new key is being inserted. The lock records the impressions on the key and rearranges the relationship between the sider and pins to match the new key.

To decode the lock using the above feature, a series of keys which are a single depth are inserted into the lock to establish the depth of each and every pin inside the lock. After a pattern that corresponds to the shape of the actual key is obtained, the entire key is designed. Such a key will effortlessly open the lock leaving no sign that the lock has been interfered with.

Practically, many Kwikset Smartkey Locks do not offer a security level higher or lower than any basic deadbolt. They are only safer in some situations, and possibly convenient in others, but no one should think of them as completely fault-proof. They are, essentially, yet another security parlor trick susceptible to hacking just like any other technology-based invention.